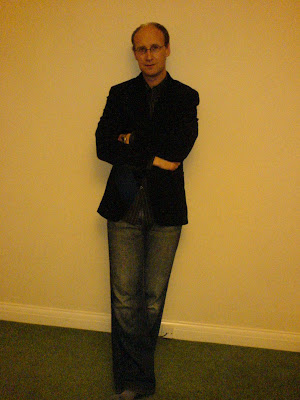 Well, its my day off today. Nice, frosty & sunny outside. Crisp. Quiet morning, wander to the local Co-op to get Saturday's Independent and relax, spending time with the kids & washing the car.

When I was a teenager in the 80's, young people could be divided into two mutually exclusive categories: Air headed trendies who liked Duran Duran, Aha and maybe Abba and earnest ban the bombers who followed The Smiths, The Jam and U2. Yep, I belonged to the second lot. Why some Christians think that its OK to like Abba, but other pop stuff is wrong, I'll never understand. Money, money, money - how materialistic is that? Dancing Queen - since when have the godly approved of dancing? Waterloo - a senseless glorification of war and imperialism! Anyway, the music I liked seemed to ring more of a chord with me than some of the escapist nonsense that was around back then. In The Jam's Going Underground Paul Weller expressed a disillusionment with corrupt, warmongering politicians that still has relevance in the UK at the moment,
You choose your leaders and place your trust
As their lies wash you down and their promises rust
You'll see kidney machines replaced by rockets and guns
And the public wants what the public gets
But I don't get what this society wants
I'm going underground, (going underground)
I still listen to Weller and U2 but I also enjoy some of the newer bands, Coldplay, Keane and Snow Patrol etc. Being patriotic, I listen to a bit of taff-rock. The late 90's witnessed the emergence of a crop of Welsh bands: The Manic Street Preachers, Stereophonics and Feeder. That's enough ramblings on music.
Spent this afternoon watching Six Nations Rugby. Italy lost to France 3-39 in a one-sided lacklustre game. But England vs Scotland was a thrilling match that heralded the return of Jonny Wilkison. Final score E 42 - S 20. Wales will play Ireland tomorrow, which is a pain. I'll have to tape the match and watch it on Monday. See here for match reports / highlights etc.
We watched ITV's Dancing on Ice on the tele this evening. After family ice skating last week, I can apprecitate the skills involved even more. Kids to bed after family worship. Then time of prayer & meditation to prepare for tomorrow moring's service. Read Mark 6 - for evening devotions.
This brings my series of blog diary entries to an end.

Email ThisBlogThis!Share to TwitterShare to FacebookShare to Pinterest
Labels: Diary

I'd be interested to read how you have managed family worship, finding the time, setting the routine, what you have changed as the children got older, etc.

Well, we have family worship on school day mornings at 7.45. Bible reading & prayer for five minutes or more. Then our oldest is off to school.

At 8.20 in the evening, I read something like Chronicles of Narnia, then Bible reading & discussion time followed by prayers with Sarah & children often praying as well as me. This lasts for 10-15 mins.

When children were very young, we used a children's story Bible or the "Me Too" Bible story series. We also read Leading Little Ones to God and an abridged Pilgrim's Progress with lots of piccies.

We try not to make family worship too 'heavy'. I keep my comments brief and let the children ask questions.

I don't know if this is any help to you. But this is what we do anyway.

Hi, I just read this series. Brilliant! You obviously take care to be redeeming the time. Just in regard to the devotions with your wife, what do they look like? Are they just seperate times of prayer? Is it daily with just the two of you? Regular bible reading? I'm getting married at the end of August and am seeking advice to see a routine established early, and from there make any changes and adaptations that would serve us both better, if any. Thanks.

In terms of devotions, we have family worship (Bible reading & prayer) with the children before they go off to school and before bed. Sarah and I usually have a time of prayer & Bible reading together before we hit the sack. In addition we have private times of prayer and meditation morning and evening. That's what we do anyway. Hope that helps.

May the Lord bless you when you get married in August.